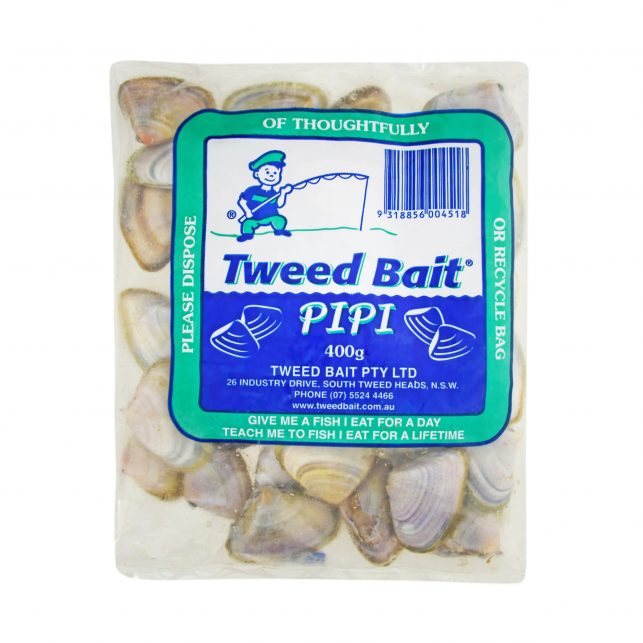 Pipis are Snap frozen, available in Small pack. Great for beach fishing along Australia’s coastline at find us in over 2000 locations.

Tweed Bait Pipis are commercially collected along east coast beaches of Australia, Pipis are also known as cockles and were collected by the indigenous people of Australia for thousands of years. Pipis are commonly used as a land base bait from the beaches and estuaries to target Whiting, Dart, Tarwhine, and Snub Nose Dart but can also be used in boats on the river and estuaries to target these species and others alike. A great bait that can be cut into little bits and added to bait jigs to entice fussy live bait to eat.

Pipis are a great and easy bait that doesn’t require much attention which makes a great bait for the kiddies to use. For the best presentation just feed it over your hook at least two times it’s that simple. A long shank hook tied on an 8-10lb leader with a sliding ball sinker is easy to rig and works very well with pipis in these locations change your sinker size to suit the current, and upgrade your hook size for the larger species. A 1/0 -2/0 hook tied to a 12-16lb leader with a sliding ball sinker size 4 works well with Pipis as bait for the species that inhabit the gutters and naturally feed on this bait. Several Pipi baits can be added to one hook to entice the larger fish to feed. Upgrade your sinker for heavy sweep and currents.

Pipi isn’t a commonly used bait offshore, but it can be added to bait jigs when trying to catch live bait and will get a bait school feeding that seem to not be interested in a bare bait jig.